Message
Javi has worked for:

The schools for childrens with special needs are a victory for the will of several women sensitized to the issue of the deficiency. Some of them newly coming to study in Cuba and Algeria began to consider the need for an institution to work integration of disabled people in the Sahrawi society, repudiated until then, or hiding in the Haimas. It´s currently a solid project that has become part of the Ministry of SADR,

Dr. Lee Chul Soo is responsible for the Zaatari Taekwondo Academy, founded in early 2013. Lee became the representative of the Korea Food for the Hungry International in Jordan and visited the Zaatari camp for Syrian refugees fleeing the war in his country. Upon returning to Seoul, days later, he could not sleep thinking about those kids. He decided to create the Academy of Taekwondo Zaatari, where hundreds of children and teachers Syrians come daily.

Audiovisual report showing the world of the war scenario in which it became the eastern Ukraine. Faced with this dangerous scenario, those who continue to suffer the consequences of the conflict are civilians. 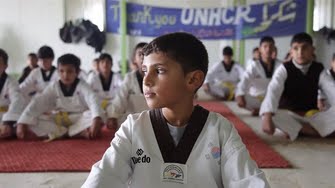 In Jordan’s largest refugee camp, a Korean NGO has set up a taekwondo academy to help boost Syrian children’s strength and self-esteem. The Zaatari Taekwondo Academy was founded by Lee Chul Soo in 2013. The objective of the academy is to form leaders for a future, postwar Syria.