Message Nadeem Hire Now
You can use Paydesk to hire Nadeem, they will be notified by SMS and usually reply within minutes. Have a question? Send Nadeem a message before making a booking. 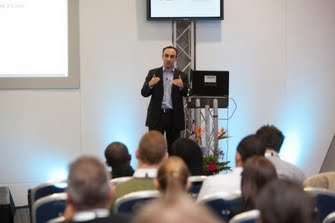 As well as appearing on television and radio, Nadeem is a popular public speaker. He has given presentations at many conferences related to business, marketing and self-development. You may see the slides of a few of Nadeem's many presentations at https://www.slideshare.net/azammarketing 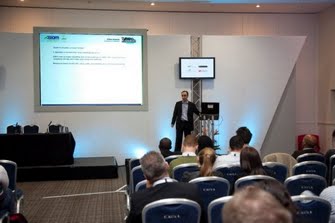 Nadeem giving a presentation at one of the UK's leading digital conferences, which was held at the Excel Centre in London. 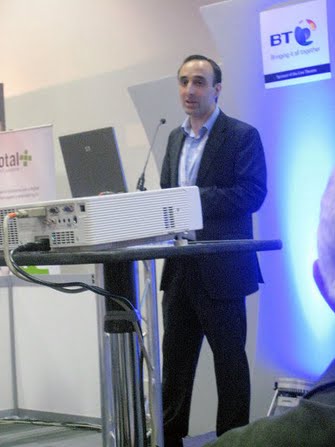 As well as appearing on television and radio, Nadeem is a highly-rated public speaker. He has given presentations at many conferences related to business, marketing and self-development. You may see the slides of a few of Nadeem's many presentations at https://www.slideshare.net/azammarketing 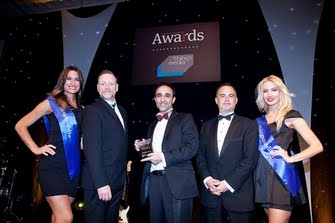 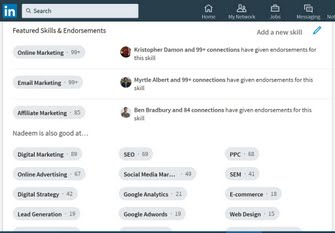 Nadeem Azam's areas of expertise, as rated by peers on Linkedin. Nadeem is widely recognised as one of the leading experts in the world in his specialist fields. Read testimonials about Nadeem at https://www.linkedin.com/in/nadeem-azam

My Incubator Ventures is a business incubator offering advice and knowledge to the online business community. They recently invited Nadeem Azam to be interviewed by them to talk about running an internet enterprise and provide advice to enterpreneurs on how to succeed in the cut-and-thrust world of business. Read the full interview at http://www.azam.info/how-to-be-successful-in-digital-business-interview-nadeem-azam/ 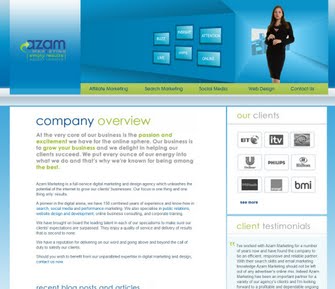 Homepage of Nadeem Azam's website. You may visit the site at http://www.azam.net to find out more about Nadeem's areas of expertise. 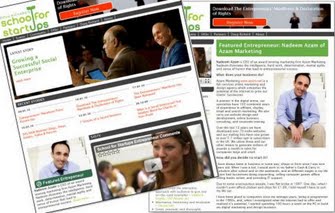 Nadeem was interviewed by Doug Richard's School for Startups website. School for Startups was one the UK’s leading provider of business training for entrepreneurs, with lots of useful information on their website and regular one-day business courses across the country. It was the inspiration of serial entrepreneur and angel investor Doug Richard, who many of you will know as a ‘dragon’ or investor in the first two series of BBC’s Dragon’s Den. I was told that Doug, who has seen some of the revenue figures of Azam Marketing, was “VERY impressed” with how well we were doing and invited to become a Featured Entrepreneur on his site. I thought School for Startups does a wonderful job to inspire and educate budding entrepreneurs, and so agreed to be interviewed. More details about the interview: http://www.azam.info/nadeem-azam-featured-entrepreneur-interview-doug-richards-school-for-startups/ 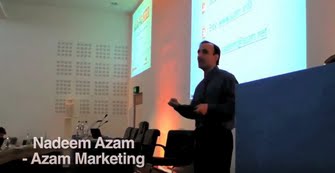 Nadeem giving a talk about Social Media Marketing conference in central London. Read about the presentation at http://www.azam.info/social-media-marketing-best-free-tools-syndication-rss-twitter/ Nadeem is a confident and engaging public speaker. 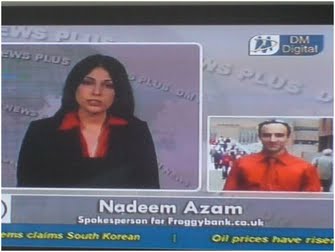 Interview with Nadeem Azam on the news of satellite television station. 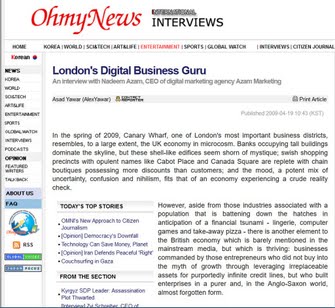 http://www.azam.info/nadeem-azam-digital-business-marketing-interview/ An interview with Nadeem Azam published on one of South Korea’s most popular news websites 'OhMyNews'. It includes insights into Nadeem’s life as a game designer and newspaper journalist. 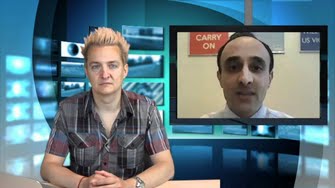 Indepth interview with Nadeem Azam. Nadeem was invited to share his expertise on digital advertising, in particular email marketing.

Nadeem Azam Interviewed about Online Retail Shopping Trends on BBC Radio. The BBC invited Nadeem onto the radio station to talk about internet retail shopping trends and offer listeners advice on how to save money by shopping online. Nadeem has regularly been invited to radio and television stations to share his expertise. He is available at short notice.

Nadeem Interviewed about Online Shopping on BBC Radio Solent. Please forward 35 seconds for the segment in which the interview with Nadeem commences. BBC Radio Solent, the station which covers the Isle of Wight, Hampshire and Dorset. The BBC invited me onto the radio station to offer listeners advice on how to save money by shopping online. Full details: http://www.azam.info/shopping-online-money-saving-expert/ 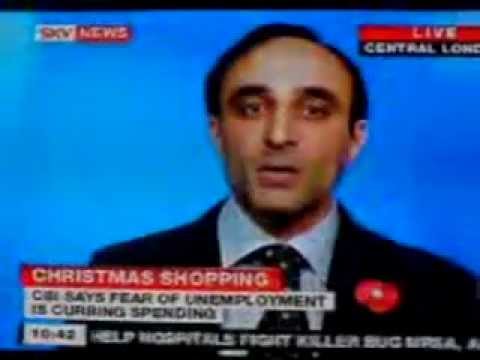 Nadeem Azam was invited by Britain's Sky News TV channel to share his expertise on retail shopping trends in the run-up to Christmas. Also interviewed are the Director General of the British Retail Consortium and the Operations Director of Hamleys. (Please forward this video to see the segments in which Nadeem speaks.) As a leading authority on business, e-commerce, entrepreneurship and marketing, Nadeem is often interviewed in print, on radio and on TV by the likes of the BBC News and Sky News. ~~ Visit Nadeem's acclaimed blog for more examples of media coverage at http://www.azam.info ~~