Stories All Around the Chiemsee: The Bavarian Sea (travel story, Germany) All Around the Chiemsee: The Bavarian Sea (travel story, Germany) 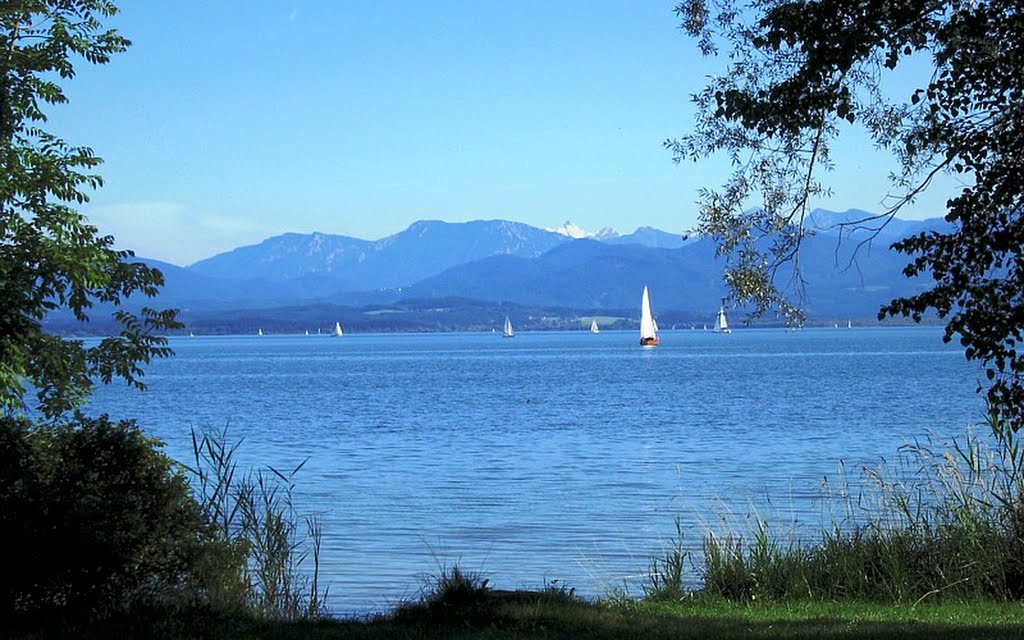 Article proposal: All Around the Chiemsee: the Bavarian Sea

(An article could be about the Chiemsee (Chiem Lake) as a whole, or about only one aspect of it or particular site, as you prefer.)

The Chiemsee is Germany’s third largest lake with over 60 kilometers of shoreline and is located less than twenty kilometers north of the Alps. It’s also an attractive travel destination since it is between Munich and Salzburg, two of the most popular destinations for travelers in Europe, and is easily reachable in about an hour on the Salzburg Autobahn from Munich or by train. I am constantly astounded how few tourists we ever see there. They might stop for an afternoon to see King Ludwig II’s Versailles-like castle (www.herrenchiemsee.de) and gardens on the island Herrenchiemsee, but they rarely stay overnight in the area or see any of the numerous other attractions around the lake, for example:

-the delightful smaller island, Frauenchiemsee, with its monastery Frauenwörth (www.frauenwoerth.de) (overnight stays there are possible) and church, pottery workshop, charming gardens, and tempting fish restaurants. It’s worth a visit even in the winter, for example, to visit the popular Christmas market on the island.

-the Roman museum, the Bedaium (www.bedaium.de) in Seebruck, which bears witness to roman settlements in Bavaria dating back to the year 50 A.D., and later celtic inhabitation.

-the village Chieming, a stop on the ancient roman road between Augsburg and Salzburg, with the four-star Hotel Gut Ising (with golfcourse) (www.gut-ising.com) and four lakeside campsites.

-the Julius Exter Haus in Übersee; the charming 500-year-old farmhouse where the avantgarde painter and sculptor lived and founded a famous art school in 1902. His former studio is the scene of frequently changing art exhibitions, and the garden is a special delight. (www.schloesser.baern.de/deutsch/schloss/uebers/chiemsee/htm)

-the delta of the Tiroler Ache, a river flowing from the Kitzbühler Alps to the Chiemsee. The delta is “the best-preserved inland delta in Europe.” You can take a boat trip through the delta or rent a kayak or canoe to paddling up the Ache yourself.
(http://chiemsee.bayern-online.de/die-region/natur/der-natur-auf-der-spur)

The Chiemsee is a rewarding destination for sports enthusiasts. You can rent boats and bicycles there, walk or bike around the lake, or even dare to see the lake from the air in a hot air balloon.(http://www.ballonfahren.info) There are several “beaches” for swimming Especially families with children enjoy the “Prienavera” leisure center in Prien (www.prienavera.de) which has a fun whirlpool, saunas, and an indoor/outdoor swimming pool and terrace and that reach right out into the lake.

The Chiemsee also sets the scene for lively summer entertainment: there’s the three-day reggae (!) festival in August (www.chiemsee-reggae.de) with over 50 bands and thousands of revellers camping out, and the Seebühne near Prien (www.chiemsee.bayern-online.de/die-region/staedte-und-gemeinden/prien-am-chiemsee/kultur/seebuehne) offers musicals, operas, and rock concerts, and more on a stage out in the waters.

I would provide my own photos to illustrate this article.