Stories The story of Parigol’s life in Afghanistan, fleeing the war and begging for survival The story of Parigol’s life in Afghanistan, fleeing the war and begging for survival 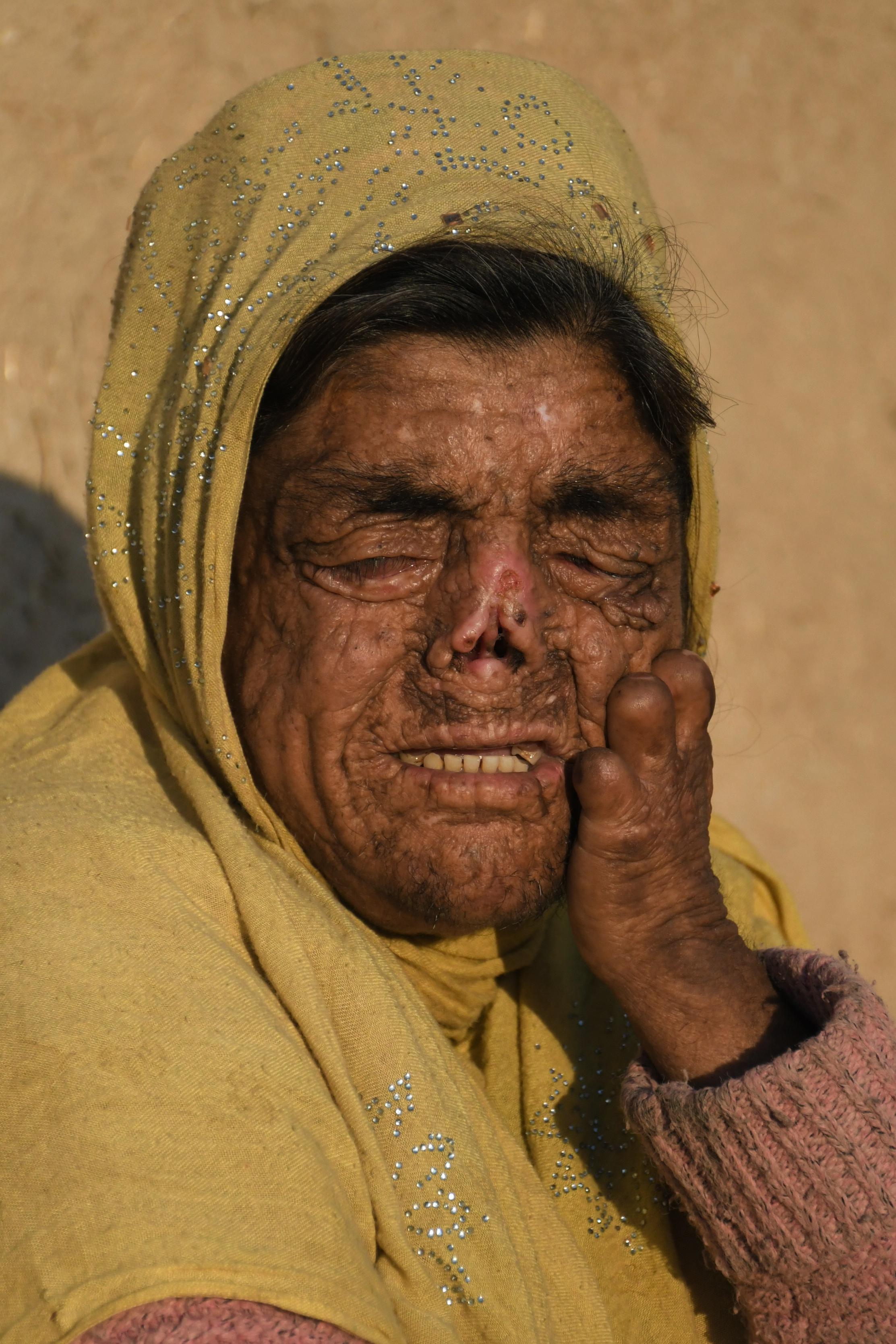 At the entrance of the northern part of the Blue Mosque, a shrine attributed to Prophet Ali, in Mazar-e-Sharif City, a woman with amputated fingers, apparently an amputated nose and low vision caused by burns and dust of the war, is begging at a time when the international community, after formation of a transition government 18 years ago, donated millions of dollars for rebuilding, education and elimination of violence against women. But poverty, illiteracy, violence against women and conflicts are still underway in this country.
Parigol who takes her veil off her face with her amputated fingers says:" It was my sister’s wedding when the war broke out." She says:" I lost my whole family in that war except my four children and my mother."
Mrs Parigol is a resident of Keshendeh district in northern Balkh Province. She comes to Mazar for living after she loses her family members. Mazar-e-Sharif City is located in north of Afghanistan and is considered one of safe cities in this country. Keshendeh district is located 90 km southeast of Mazar-e-Sharif. The Taliban have recently been engaging in fighting with Afghan security forces in the district and the outskirts of Mazar.
According to UNHCR, in 2019, more than 426,500 people were displaced in Afghanistan due to conflicts and insecurity. Based on the report, more than 177,500 displaced people are from northeastern provinces.
How Parigol sustained injuries?
Parigol said:" I was in the courtyard that a bomb was thrown. My sister and her husband, who were going to their room, lost their lives in front of my eyes."
Parigal who started crying continued to say:" When I come to my sister, another bomb hit the courtyard, its pieces cut off my fingers and my nose."
She said the reason that the bomb hit their wedding ceremony was due to ongoing war between Afghan security forces and the Taliban. She says the government of Afghanistan mistakenly carried out an air raid on their wedding party that killed 12 members of her family and injured 20 others who were relatives of Parigol. Parigol does not remember which year the incident had occurred but says:" The incident happened during the era of the former Afghan president Hamid Karzai." Karzai was the first elected president of Afghanistan. The first presidential election in Afghanistan was held in 2004.
The attacks mistakenly carried out by Afghan and NATO forces have consistently left tens of people killed and injured which Mrs Parigol is one of the victims of these attacks.
Head of the Independent Human Rights Commission in north Sayyed Mohammad Sa’me, told the Euro News that 207 people were killed and injured within a year in north, adding:" 53 individuals lost their lives and 154 others got injured in the attacks."
Parigol says when her face and hands sustained injuries, her mother treated her at home. She says:" My mother went to our neighbours to collect money for my treatment."
Mrs Parigol might not be the only victim of war in Afghanistan. Tens of other women like Parigol have been victims of the war, but no one has so far heard their scream."
What are the statistics?
Sayyed Lotfullah Barezm, head of UNAMA communication office in Mazar-e-Sharif has provided a statistic to Euro News correspondent indicating that:" from 2009 until 2013, 23,124 were killed and 37,201 others got injured. It is not clear how many of the dead and wounded are women, men and children."
Barez tells the Euro News:" From 2014 until 2019, 62,713 people have been killed, of which, 4,785 are children, 1,942 women and 13,873 are men."
Parigol is amongst the 4,740 women who has sustained injuries in her nose and hands in the fight between Afghan and NATO forces and the Taliban.
But for Mrs Parigol, who has lost her family and parts of her body in the war, life has no meaning.
She told Euro News that no relief institution has helped her after she suffered damages in the war. She adds:" I beg from dawn to dusk. My son polishes shoes. I don’t have any breadwinner and the government also pays no attention."
She says after she suffers damages in the conflict and loses her husband, she makes her daughters to get married at the age of 12 and 14, being afraid of sexual abuses.
Her daughters are now 15 and 17, and have children too, but they are not satisfied with their lives and say that they often get beaten by their husbands.
Aramgol is the second daughter of Parigol. She has come to Mazar from Keshendeh district for some days. Aramgol says her life is not that much good. Her husband often beats her for various pretexts. Aramgol who was caring for her six-month old baby says:" My adopted sisters go to school, but I am a housewife. I am married and I should serve my husband. But what about my future?"
A statistic provided by the Independent Human Rights Commission in north to Euro News indicates that seven cases of sexual abuses were registered in north and northeastern provinces in 2019. The statistics include two cases in Jowzjan province, four cases in Sar-e Pol province and one case in Samangan.
Sayyed Mohammad Sa’me, told Euro News correspondent that there has been a 40-percent surge in violence against women in north of Afghanistan compared to the previous year.
Mr Sa’me said:" Overall, violence against women has in increased by eight percent across the country, but at the level of the provinces (Balkh, Samangan, Jowzjan and Sar-e Pol), violence against women has surged by 40 percent."
Although, billions of dollars have been donated for rebuilding, education, elimination of violence against women and reduction of conflicts in Afghanistan, war is going on in some parts of the country and the statistics provided to Euro News by Sayyed Loftullah Barez, head of communication office of UNAMA in north, indicate that 123,38 people were killed and injured between 2009 to 2019 in north of Afghanistan.