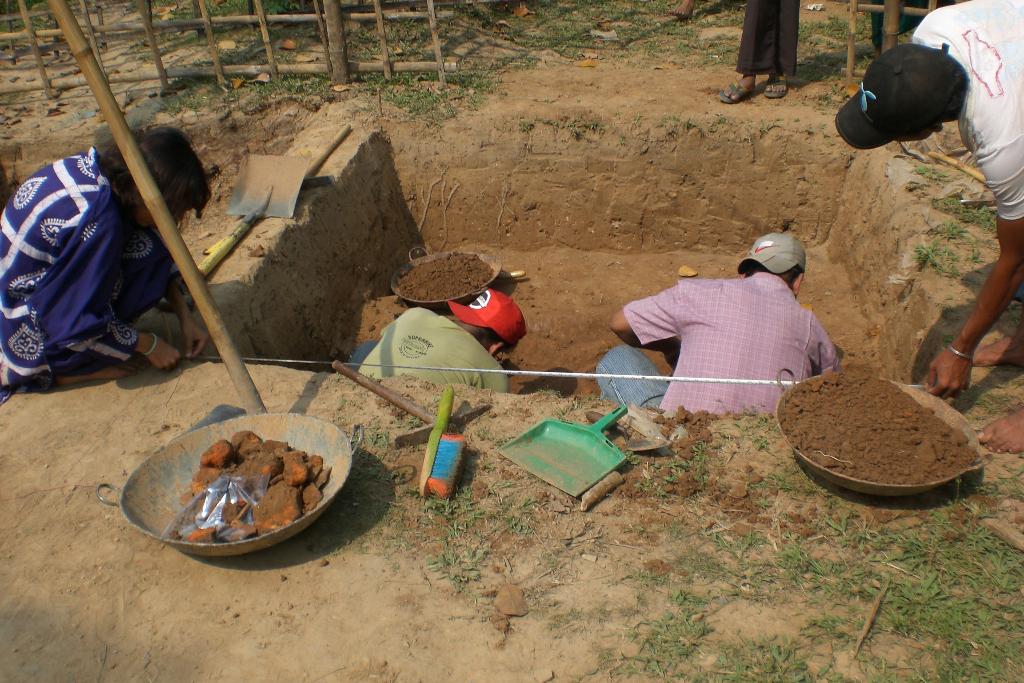 Wari-Bateshwar is an archeological site of two villages, Wari and Bateshwar, located in Belabo and Shibpur upazilas of Narsingdi, 60 km northeast of Dhaka, the capital city of Bangladesh. It is thought to be a fortified city located underground. According to experts, it is about two and a half thousand years old.

However, some archaeological finds in 2000 confirm that Wari's settlement dates back to 450 BC, after carbon-14 tests in laboratories in the United States, the Netherlands, and New Zealand.

The Department of Archeology of the Government of Bangladesh is continuing the excavation work in Wari-Bateshwar area. During the last excavation at Wari on January 2, 2017, a number of artefacts were collected.

History of Discovery and Excavation::

Jahangirnagar University Department of Archeology teacher. According to Sufi Mostafizur Rahman, Wari-Bateshwar was a prosperous, well-planned, ancient ganj or trading center. "Saunagara" which was mentioned by the Greek geographer Ptolemy in his book "Geography".

Wari and Bateshwar are two villages in Belab upazila of Narsingdi. Wari larger in size. Different archeological material was often found in these two villages. In December 1933, while digging in the village of Wari, workers discovered a treasure trove of coins in a jug. Local school teacher Hanif Pathan collected 20-30 coins from there. These were the oldest silver coins of Bengal. Muhammad Hanif Pathan published a news item in the then weekly Mohammadi newspaper entitled "Receipt of Coins". He was making his son Habibullah Pathan aware of various archeological elements in the area. In 1955, local workers abandoned two iron bars in the village of Bateshwar. He was overwhelmed when Habibullah sent his father with the triangular and one-faced eyes and heavy iron balls. On January 30 of that year, Hanif published an article in the Sunday issue of the daily Azad entitled "Prehistoric Civilization in East Pakistan". Later, various archeological sites were found in the area at different times. In March 1956, Jaru Mia, a farmer from the village of Wari, discovered a treasure trove of stamped silver coins while digging. There were at least four thousand coins in that store. The weight was nine ounces. Unable to comprehend the historical value of the coins, Jaru Mia sold them to the silverware for eighty rupees per ounce.The priceless items of history for only 720 rupees The silver melts in the furnace and is lost forever.

Habibullah Pathan was an unpaid collector of the Dhaka Museum in 1974-1975. He then donated a significant number of stamped coins, stone beads, iron axes and spears to the museum for research. At that time he donated thirty iron axes from Ringertech village to the museum. Around 198 AD, Shahabuddin of Wari village recovered a collection of 33 bronze pots from the ground. Later, Shahabuddin sold them to a bhangari for only 200 rupees. Habibullah Pathan once paid a small fee to local children and teenagers for collecting antiquities and began collecting various undiscovered archeological artifacts in the Wari-Bateshwar area. His diligent efforts led to the discovery of Vishnupatta, a rare single specimen of Bengal, a galloping horse made of bronze, a vessel with a high tin handle, a Shiva offering vessel, a fragment of a relic casket, a stone batkhara, a Neolithic stone,Stone seals, triratna, turtles, elephants, lions, ducks, insects, flowers, crescents, stars, protectors, terracotta shells, portraits of the sun and various animals, rings, bronze eagles, thousands of low-value stones and glass beads.

In the 1930s, Muhammad Hanif Pathan (1901-1969), a local schoolteacher, first brought Wari-Bateshwar to the notice of the affluent society. Later his son Mr. Habibullah Pathan started writing in newspapers highlighting the importance of the place. Although archaeologists have repeatedly voiced concerns, official excavations have been delayed. Finally, in the year 2000, excavations started at the initiative of the Department of Archeology, Jahangirnagar University. The excavation was led by Sufi Mostafizur Rahman, the head of the department, Mizanur Rahman was the deputy leader, and the students of the Department of Archeology of Jahangirnagar University were active in the entire excavation. Grameenphone, a mobile phone service provider, came forward to support them. When the ninth phase of excavation started on January 9, 2010, for the first time, the Ministry of Culture of the Government of Bangladesh came forward to provide financial support. The local people provide spontaneous assistance at all stages of the excavation.

Archaeological excavations at Wari-Bateshwar have uncovered about two thousand year old forts, ports, roads, sidewalks, terracotta plaques, low-value stone and glass beads, and the oldest stamped silver coins of the subcontinent. Specialist architects have already begun research on the inverted-pyramid-shaped architecture. The four rock patterns found here are believed by some to be of the Paleolithic age. In light of the Neolithic tools found,

They may have been used here in the middle of the second millennium BC. The duration of the huge iron ax and spear blade has not yet been determined. However, Dr. Based on the chemical tests of the universe, these are thought to be 800-400 BC. Stamped silver coins are likely to have been in circulation during the Maurya period (320 BC - 187 BC). Glass beads were probably in circulation from the 4th century BC to the 1st century AD. In the year 2000
Archaeological excavations at Wari at the initiative of the International Center for the Study of Bengali Art tested two carbon-14s of North Indian black smooth pottery, rolled pottery, nubbed pottery, etc. In that test, the settlement of Wari has been confirmed to be 450 BC. The village of Wari has a square average and moat with a length of 633 m. The average and trench marks are almost extinct except for the trench on the east side. Another external gorge and moat with a length of 6 km extends from the village of Sonarutla to the border of the Andial Kha River over the villages of Bateshwar Haniyabaid, Rajarbagh and Amlab. The locals call it "Assam Raja Garh". Two such defensive walls are indicative of important commercial or administrative centers, which is also one of the conditions for urbanization.

An ancient paved road 18 meters long, 8 meters wide and 30 centimeters thick was discovered in the village of Wari during the excavation of Jahangirnagar University in March-April 2004. Pieces of brick, lime, pieces of North Indian black smooth pottery have been used in the construction of the road, along with small pieces of iron with laterite clay. Jahangirnagar University, head of the Department of Archeology. Sufi Mostafizur Rahman claims that it is two thousand years old. Dilip Kumar Chakraborty, Professor, Department of Archeology, University of Cambridge, is of the opinion that such a long and wide road has never been discovered before in the second urbanization civilization in the entire Gangetic valley. The second urbanization in the Gangetic valley refers to the period of urbanization after the Indus Valley Civilization. As a result, what is said to have been discovered is not only in Bangladesh, but also the oldest road in India after the Indus Valley Civilization.

Wari-Bateshwar is situated on the south bank of a dry riverbed called Koyra, near the confluence of the old Brahmaputra and Arial Kha rivers. Considering the geographical location, the ancient historical period has made this archeological site more and more clear as a center of foreign trade. From Ptolemy's account, Dilip Kumar Chakraborty speculates that in early historical times, Wari-Bateshwar served as an entry port for the collection and distribution of goods from Southeast Asia and the Roman Empire. Sufi Mostafizur Rahman wanted to establish this idea firmly.

Various archaeologists point to this region of Bangladesh as the site of the "Saunagara" mentioned by the Greek geographer Ptolemy. Ancient Subarnagram is now known as Sonargaon. The place is a pasture raised from riverine silt - the famous capital and river port of the Middle Ages. Therefore, it is assumed that the extent of Saunagara-Subarnagram-Sonargaon was covered by rivers like Savar, Kapasia, Barshi, Sreepur, Tok, Belab, Morjal, Palash, Shibpur, Manohardi, Wari Bateshwar, Laksha, Brahmaputra, Arial Kha, Meghna etc. From the colorful glass beads and sandwich glass beads found at Wari-Bateshwar, and based on foreign trade in various parts of India, and Southeast Asia (Thailand) and the Mediterranean (Roman Empire), many archaeologists refer to Wari-Bateshwar as "Ptolemy". Doing. One stone and the other terracotta offering piles are found from Sonarutala village. They are thought to have been used in the Copper Stone Age. A group of people who settled in the Copper Age (1600 BC-1400 BC) on the Panduraja mound in West Bengal, India, have made gray, red and black pottery with the imprint of rice bran. The tradition of making bricks and pottery by mixing paddy or rice husk in the clay is a sign of the long-standing culture in the region. According to information obtained by Alexander the Great and his army, Diodorus (69 BC-16 AD), writing about the country after the Indus, mentions that the region across the Ganges was dominated by the Gangaridai. It is mentioned that the king of Gangaridai was very powerful in the 4th century BC. He had 6,000 infantry, 1,000 cavalry and 700 elephants. The data indicate that distant western nations were aware of their names and fame for the next 500 years.

In March 2010, the ninth phase of excavations revealed a 1,400-year-old brick Buddhist Padma temple. The walls of the 10.6 meter by 10.6 meter square Buddhist temple are 80 cm wide and the foundation is one meter. The foundation of the clay masonry walls is projected in three steps. To the north, south and west of the main wall there are 70 cm wide walls parallel at a distance of 70 cm. Around the main wall there is a 70 cm wide circular path paved with bricks. On the outside of the orbit, there are 60 cm wide walls parallel to the main wall. However, the distance between the main wall and the outer wall to the east is 3.5 meters. To the east there is a detour and a porch. So far, two construction eras have been identified in the Buddhist temple. Although some of the bricks of the early construction period have been uncovered, it will take more time to identify other features. However, in the later construction period, a brick altar was found in the east-south corner. During the excavation, a lotus with eight petals came out intact. The presence of this lotus gives the temple the status of a lotus temple. The lotus is very significant in Buddhism. The lotus is one of the eight auspicious symbols of Buddhism. The temple has been identified from Mandir Vita in Shibpur upazila.

In the meantime, many eminent archaeologists from home and abroad have published valuable research on Wari Bateshwar. However, the Bangladesh Department of Archeology has not yet released any report.

No museum has been set up to display the various archeological specimens excavated at Wari-Bateshwar. Some specimens are in the possession of the Department of Archeology of Bangladesh and some specimens are in the possession of the Heritage Research Center. However, Hanif Pathan on his own initiative established a family museum in his hometown called 'Bateshwar Archaeological Museum and Library'. At present his son Md. Habibullah Pathan takes care of it. It contains iron axes of three thousand years ago, Neolithic specimens of four to five thousand years ago, bronze rings of copper age of three to four thousand years ago, burnt clay spheres used in battlefields, stone beads of various colors, stamped silver coins of BC, various histories compiled at different times. Collection of periodicals, memorabilia and thousands of rare books.