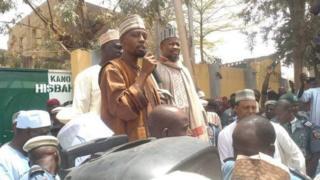 Nigerian singer sentenced to death for blasphemy
•
A Nigerian upper Sharia court has sentenced a 22 year old, singer, Yahaya Aminu to death for committing blasphemy. The court found him guilty of committing blasphemy through a song he circulated via WhatsApp in March, 2020.
Mr Yahaya Sharif-Aminu did not deny the charges and the Judge, Khadi Aliyu Muhammad Kani says he could appeal against the verdict.
States across Muslim-majority northern Nigeria use both secular law and Sharia law, which does not apply to non-Muslims.
Only one of the death sentences passed by Nigeria's Sharia courts has been carried out since they were reintroduced in 1999.

Treatment-I intend to look at the fairness of the death sentence and if the death penalty is still relevant in the 21st century.