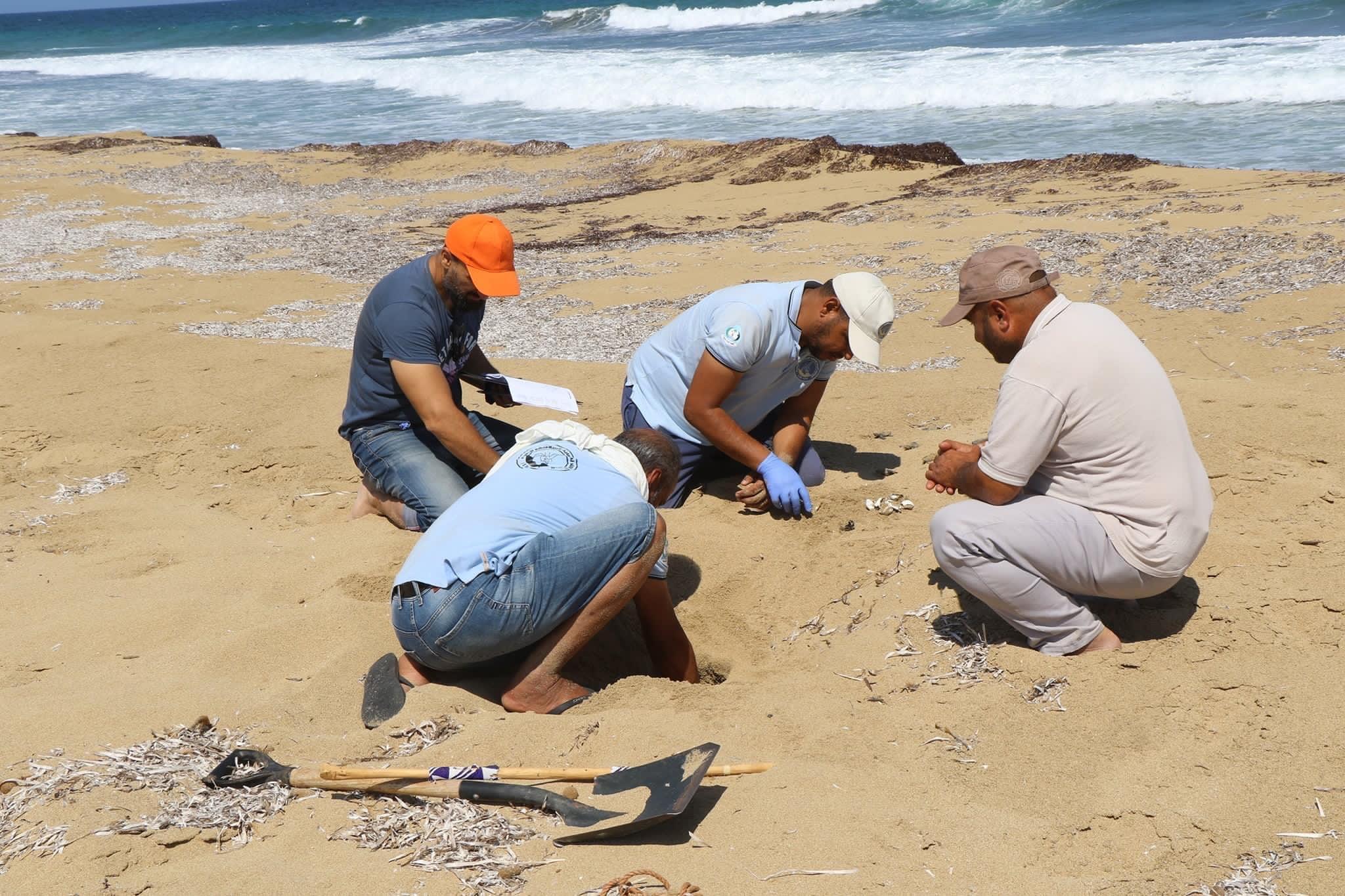 The Libyan program to protect endangered sea turtles and maintain the ecological balance in the Mediterranean waters.

Libya is located between latitudes 19 degrees and 34 degrees north, and the Libyan coast is considered the longest coast in the African countries bordering the Mediterranean Sea.

Sea turtles are one of the important creatures to achieve ecological balance in the seas and oceans, and there are 7 species worldwide, and what was recorded on the Libyan beaches is a type called gigantic head, which is 90 cm long and weighs 135 kg when it reaches adulthood.

These turtles frequent the sandy beaches of various coastal cities in Libya, including the coastal city of Misurata, to lay eggs at the beginning of May of each year after the mating process takes place at sea.

When the turtle reaches the beach, it explores to determine the appropriate place, then begins digging the nest in the sand and lays between 60 to 120 eggs and fills them to start the incubation period for the nest, which ranges from 45 days to 50 days.

And here comes the role of the sea turtle season monitoring and follow-up team of the Environment Working Authority in Libya. “The team conducts surveys of the beaches where turtles are located, monitors them, identifies the places of their nests and protects them, and records all data related to the turtle, the location of the nest and the data of the eggs, and then they perform a protection work for the nest and in some Sometimes they change the location of the nest in order to prevent it from deliberate sabotage by the weak-willed who believe that turtle eggs are a cure for some diseases or that it is a cure for sterility, and also protect the eggs from some animals such as dogs and foxes that are waiting for the turtles to come out on the beaches.

As the extent of the damage to these turtles is very large, this species in particular is a loggerhead turtle that is globally classified as an endangered species and is listed in the Red List and is subject to the protection of the International Union for Conservation of Nature. From which they hatched years ago and return to them after mating, carrying eggs to lay them on the shores of the same beach. If you do not find the appropriate environment for digging nests on the beaches for laying eggs, they return to the sea and lay their eggs in the water, and an entire generation of sea turtles will become extinct.

This protection and follow-up program was sponsored by the United Nations before 2011, but later and after the support stopped as a result of the events that occurred in the country and in these circumstances, the team of the Environment Public Authority, especially in the city of Misurata, works to protect this endangered marine creature by self-efforts every year at the beginning of the year. The ovulation season for this marine creature, my father frequented the beaches east of the city of Misurata

It is distinguished by the sand suitable for laying eggs. A proposed report on a race with loggerhead turtles to preserve the emblematic species in the shores of Libya from extinction.

The Libyan program to protect endangered sea turtles and maintain the ecological balance in the Mediterranean waters.