Munich Confronts its Nazi Past at the National Socialist Documentation Center 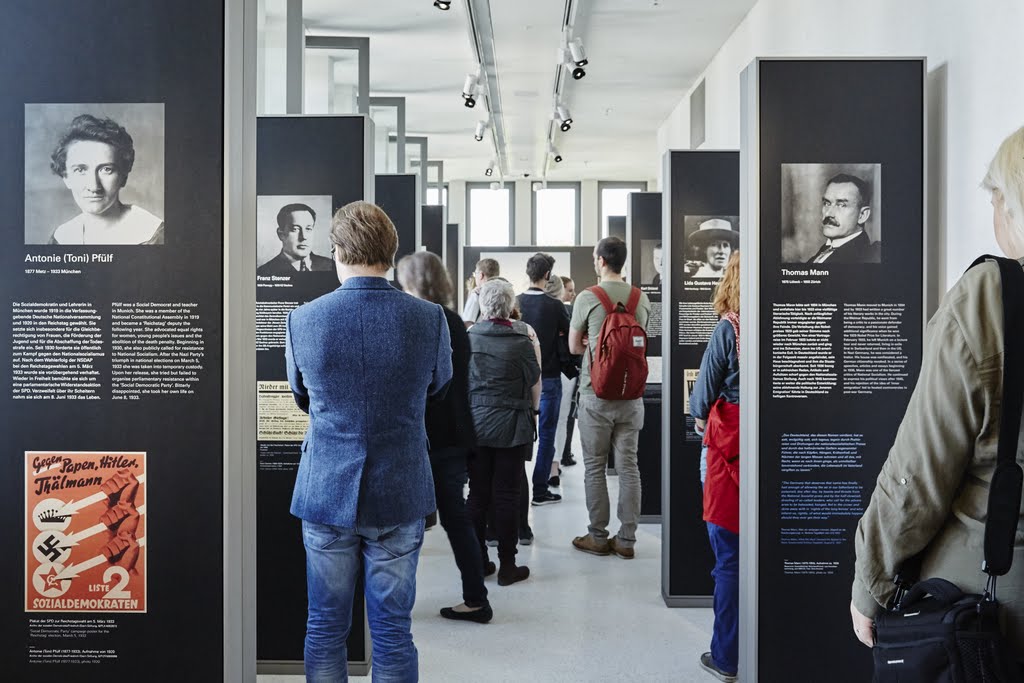 The Braunes Haus, the building that housed Nazi party headquarters in Munich from 1930 to 1945, in fact no longer exists; it was destroyed by Allied forces after the war. But precisely at the site where it once stood, the National Socialist Documentation Center represents Munich's final coming to terms with the most shameful chapter in the city's history.

When I arrived in Munich in 1985, it still seemed taboo for Germans to talk openly about what happened during the war. So much has changed since then. In May 2015, the Nationalist Socialist Documentation Center opened its doors to bravely face a past that many Bavarians would rather forget. With its countless documents, photos, and other artifacts, the center is devoted to learning and remembering, and pledges too to foster tolerance and democratic values in future generations.

The documentation center is located very centrally in Munich and looks out on monumental Königsplatz, ("King's Square"), a grandiose space featuring neo-classical, nineteenth-century structures that was favored by Hitler for staging parades and other propaganda events. Right next door still stands another edifice of importance in the history of the Nazi party: a building with a columned portico that was erected in the 1930s as the Führerbau. Today the former Führerbau is home to Munich's University of Music and the Performing Arts, but it was originally the scene of important Nazi events such as the 1938 signing of the Munich Treaty, which validated Nazi Germany's annexation of Sudetenland, the German-speaking region of Czechoslovakia. All together, this area of Munich was once known as the "Party Quarter", where about 6,000 people worked in offices for Hitler's party.

The National Socialist Documentation Center receives about 300,000 visitors per year. Its exhibits strive to answer questions in three main theme areas: "Exclusion and Persecution", "Why Munich?" and "What has This got to Do with me?" Approximately one and a half hours is the estimated time for a first visit. You can learn about historical events, how Munich has struggled with and managed its memories of this time of disgrace, and also about neo-Nazi threats in Germany today. On display are photos, documents, and texts, complemented by film footage and multi-media stations. On the lowest floor there is an interactive learning station where specific sources can be accessed. Four upper floors house the permanent exhibition. A large area is reserved for changing exhibitions. Monitors on the lawn surrounding the documentation center also show photo and text collages in short film sequences that explain events and buildings in that part of town.

The exhibition tour starts with the end of World War I, the November Revolution of 1918, and the founding of the Weimar Republic. Then we learn about rise of the Nazi party. Next, there is a presentation about how the Nazi state functioned and what it was like to live in Germany during that time. We then learn about consequences of the war, and the demise of Hitler's government. Finally, we come to understand how neo-Nazi groups still pose a threat in Germany today.

Included in the box with this article could be practical information about the documentation center, including tips about tours, audio guides, and books in English. The box could also include a reference to the National Socialist Documentation Center in Cologne Germany, which was opened in 1979.

Munich's NS Documentation Center would provide us with high-quality, gratis photos - many of which can be downloaded from the center's website.

As you can see, a visit to the National Socialist Documentation Center in Munich would be the perfect opportunity for your readers to learn from experts and from original sources all about one of the main causes of World War II: the rise of the Nazi party and its diabolical world-view. The fact that the documentation center is located precisely where the whole Nazi movement began makes a visit there all the more moving, informative, and memorable.