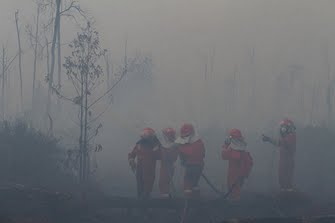 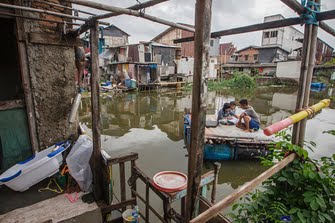 Father and his daughter on raft at Kampung Apung in Jakarta, Indonesia. Kampung Apung is like an island in the middle of the lake. The surface is full of puddles, except a 1 meter wide road with 50 meters length that heads to the residence area and splits the puddles. A 6-hectare slum area in Kapuk Subdistrict, has been prone to floods since 1992. It was a peatland situated few hundreds meters away from the coastal area. The depth of water was just 20 centimeters away. But the Jakarta reclamation project aimed at creating an elite residence and industrial area has barred the water from normally flowing from the central of the city to the sea. The area has now lower precipitation. Every year 200 families, most of which are poors, are forced to heighten the their house floors following as water level keeps increasing 20 centimeters every year. During rainy season, water can reach up to half a meter and subdue the houses. Currently 450 people live on the area with water has reached 3 mete 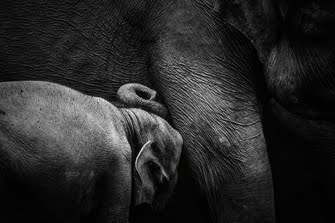 Sumatran elephant playing trunk with the mother in Indonesia. Sumatran elephants feed on a variety of plants and deposit seeds wherever they go, contributing to a healthy forest ecosystem. They also share their lush forest habitat with several other endangered species. The current Sumatran elephant population is estimated at 2,400–2,800 wild individuals, excluding elephants in camps, in 25 fragmented populations across the island. More than 85% of their habitat is outside of protected areas.