Message Jeff J. Hire Now
You can use Paydesk to hire Jeff J., they will be notified by SMS and usually reply within minutes. Have a question? Send Jeff J. a message before making a booking.


Pictured above: People’s Liberation Army (PLA) soldier saluting Chinese flag, during the daily raising and lowering ceremony, at their base on Hong Kong’s Stonecutters Island.. The 1989 Tiananmen Square protests are the CIA’s color revolution template, that has been successfully used around the world for the last 30 years to destroy and take control of anti-imperial countries. It won’t overturn the Chinese people’s communist-socialist way of life, but a 30th anniversary military intervention in Hong Kong would be a powerful Big Lie Propaganda Machine (BLPM) “totalitarian poster child” cudgel to pound the Mainland for another three decades. 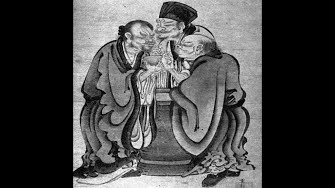 Pictured above: left to right, is the depiction of the famous allegorical story of Confucius, Laozi and Buddha each tasting vinegar in a vat, and the interpretation of their results. Today's Hong Kong could be represented by the vinegar. All three are in mind and spirit watching over China's wayward territory.