Message
Lauren has worked for: 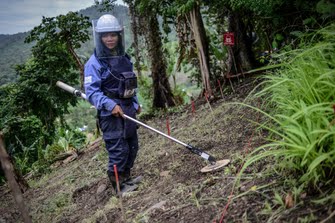 Sok Kanthy, 27, has been working as a deminer with HALO for two months. She uses an Ebinger GC tool to detect mines hidden in the ground in the K5 mine belt in Pailin province, Cambodia. From an assignment in 2015 for The Globe and Mail. More work can be seen at www.laurencrothers.com

I was invited to speak on ABC Australia's Radio National program about Cambodians' reactions to a refugee deal between the Cambodian and Australian governments. More info can be found here: http://www.abc.net.au/radionational/programs/drive/cambodians-protest-against-australia-refugee-deal/5772858


This is a selection of the work I have done for The Guardian.