Message marial deng Hire Now
You can use Paydesk to hire marial deng, they will be notified by SMS and usually reply within minutes. Have a question? Send marial deng a message before making a booking. 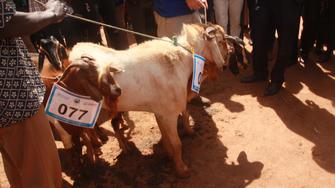 In this picture, a goat is displayed at Rumbek Freedom square during the competition for the most healthy livestock for an award in a show organized by Food and Agriculture organization of the United Nations funded by USAID in July 2019