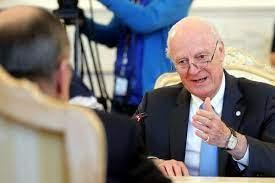 During the testimony of the Saharawis residing in the Tindouf camps, it must be ensured that the Algerian intelligence agents must not intervene, nor exert pressure, by which Algeria controls the Sahara file, with the aim of controlling the African continent in favor of its first ally, Russia, which is trying to cut Morocco's trade route through the Mali desert to Africa


Currently, this role is played by its Russian ally through the Wagner Russian company and security group in the desert of Mali, so that Algeria clears its position


The visit of the United Nations envoy, Counselor Staffan De Mastura, to Tindouf, in a desert controlled by Algerian influence, must be conscious and have a mechanism and capacities through which to ensure and verify the identity and affiliation of Sahrawis, and reveal any duplication of Algerian intelligence agents during testimony to the UN envoy

The visit of Mastura's United Nations adviser to Tindouf, which is controlled by Algerian officials by inserting intelligence agents among the Sahrawis of Tindouf, is dangerous in deciding the path that will determine the Sahara file for the envoy of the 'UN


The envoy must have careful criteria to determine the identity of a Sahrawi when testifying and representing Sahrawis, and exclude the testimony of any intelligence agent and false testimony in favor of Algeria.